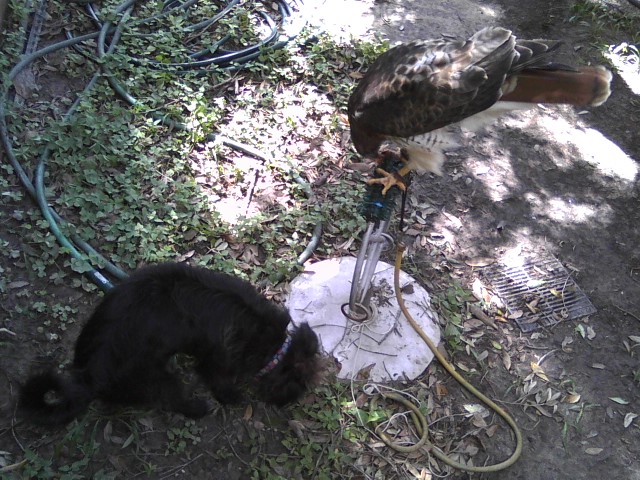 Cisco Launcher Leash exercising with Arnold during molt. Arnie is hoping for a scrap. Also that Cisco won't pop him. 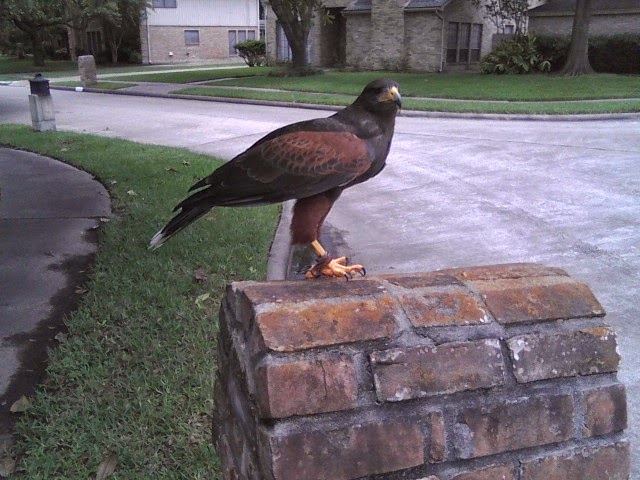 This is hunt #2. Cisco was a little sluggish out at Freedom Park. There were squirrels but he was not hunting hard. No chases. Nice kettle of broad-wings, see the link. 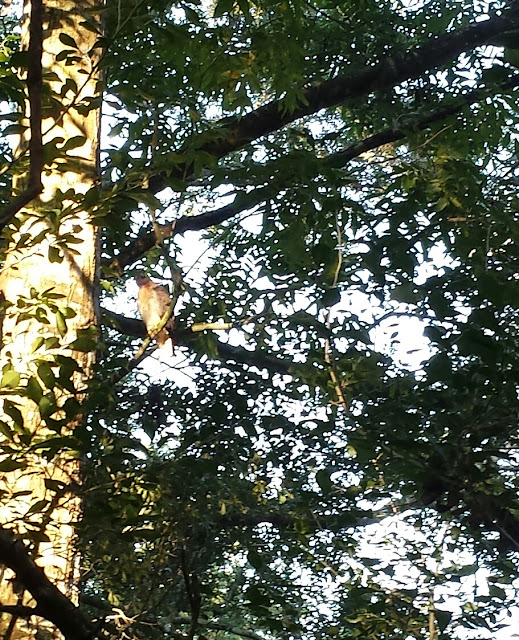 Posted by Chuck Redding at 8:13 AM No comments:

It has been a long while since I updated this blog. Sorry.

The season turned out well after all. As I write this, the hawks are beginning to molt, both high in weight. The Harris’s hawk finally started to catch sparrows, she caught good number, and it was very exciting to watch. Not having cotton rats probably helped in the sparrow transition. Farrah caught some rabbits too, not numbers like other seasons, but OK. Cisco put in a solid performance, catching 21 squirrels along with a few birds and rabbits. I will attach pictures associated with this post. Have a good summer and if you are a falconer, have a clean molt.

I am exercising the hawks out in the cul-de-sac, with a slightly modified technique. I toss bits of meat into the grass and the hawks pounce. After that they fly to perches. The HH prefers the neighbor's roof, while the higher wing loaded RT flies to a live oak. Yesterday Cisco chased a squirrel and a white winged dove, and I mean chase. Tried to fly the dove down. Amazing. 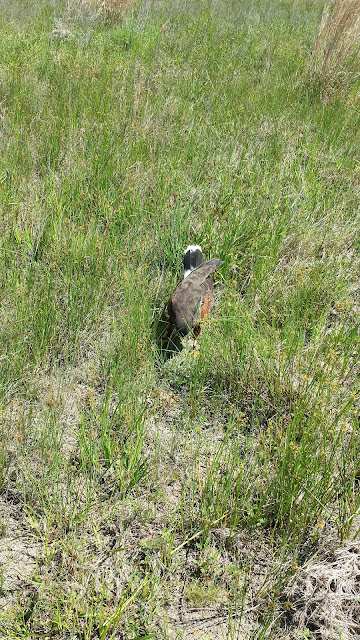 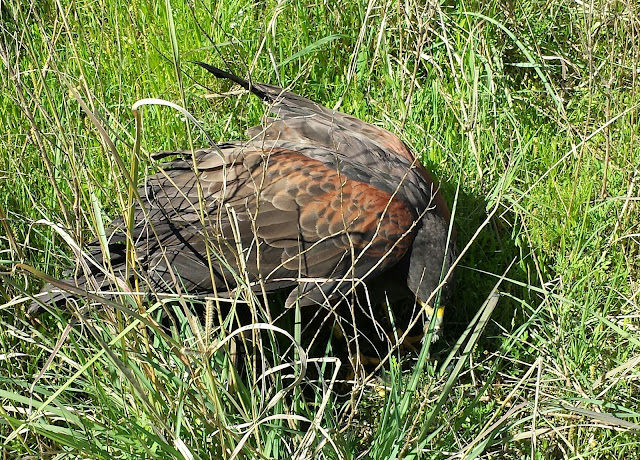 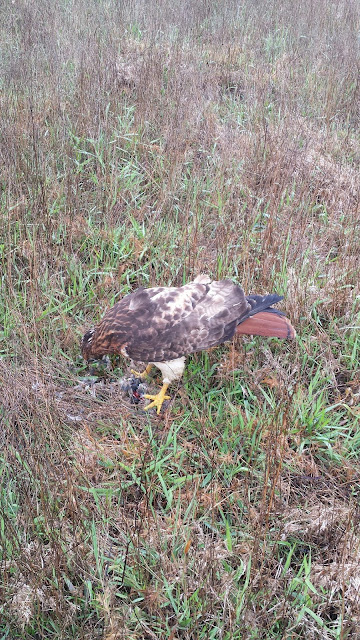 Likewise Cisco with two on this particular hunt 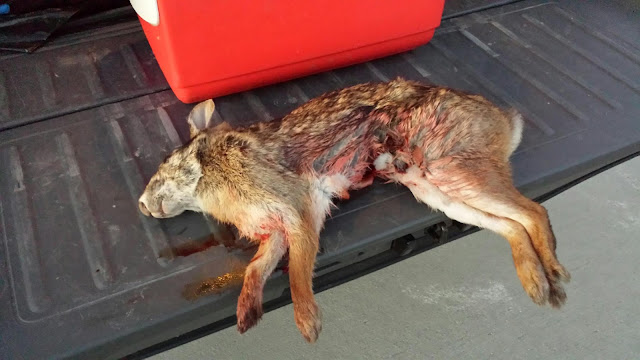 An uneventful catch of a squirrel on 2/24. Cisco was at 960 grams, appeared only moderately intent, but bagged a squirrel with little effort. Two days earlier, he quickly bagged a squirrel,  but after trade-off managed to inadvertently bag my wrist. Lots of blood, but all is well. 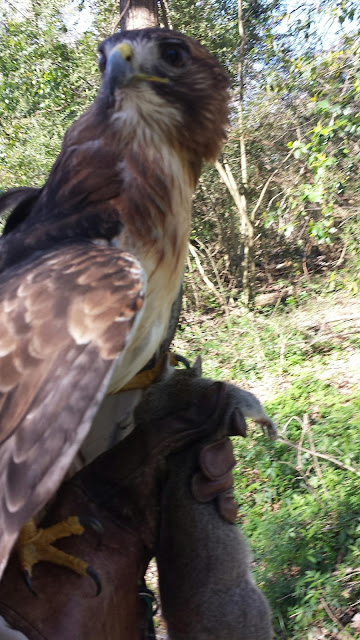 Posted by Chuck Redding at 11:52 AM No comments:

This morning we had a dandy rabbit flight with Jim Ince and Ryan Cantor aboard. It was windy out in Katy but nothing like two days ago. Farrah was at 818 grams including bell when we headed to breakfast. In the field, Farrah showed little aversion to Jim and Ryan. We attacked the same briar patch we have been recently hawking out there. Today while Farrah was looking upwind and away, a rabbit left the brush and was running fast in the opposite direction. I didn't think Farrah even saw it. I yelled ho ho! Farrah suddenly flew up and made a huge vertical arc and covered the hundred yards quickly. The rabbit performed a fancy jump to evade and all was still. I ran out to find Farrah with both feet on the rabbit in a tussock. A beautiful flight and great catch. If there was anything wrong with the hunt, it was that it was over so fast. 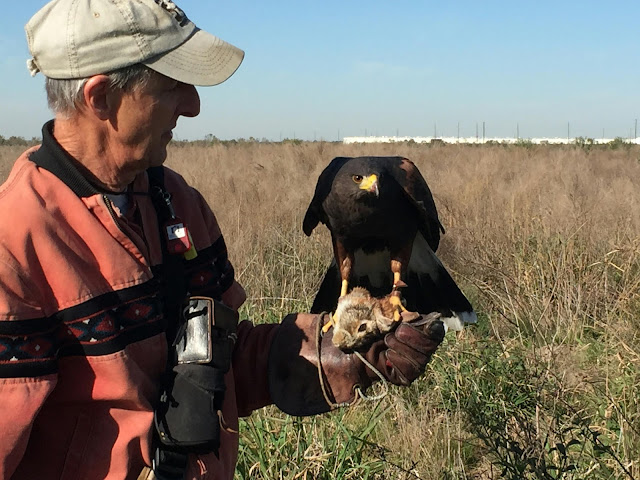 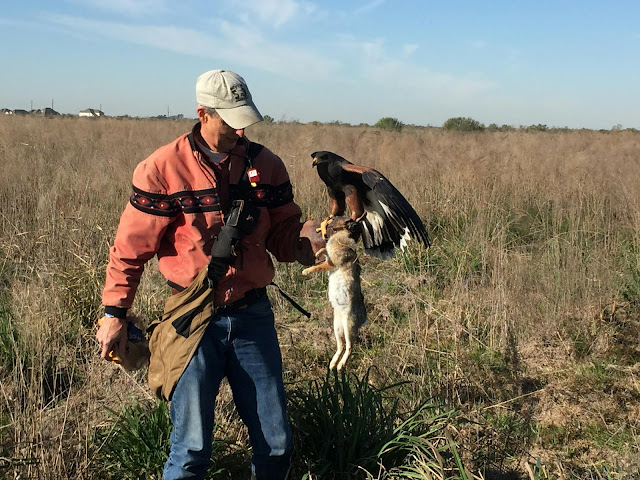 Posted by Chuck Redding at 9:17 AM No comments:

Since there are no rabbits around, I have decided to turn Farrah into a sparrow hawk. On each of the last two sparrow outings she caught one of these instead.

Farrah took her second rabbit today since I turned her into a sparrow hawk. No sparrows, two rabbits. Very windy, and an exceptional performance after a very disappointing Colorado road trip for her. 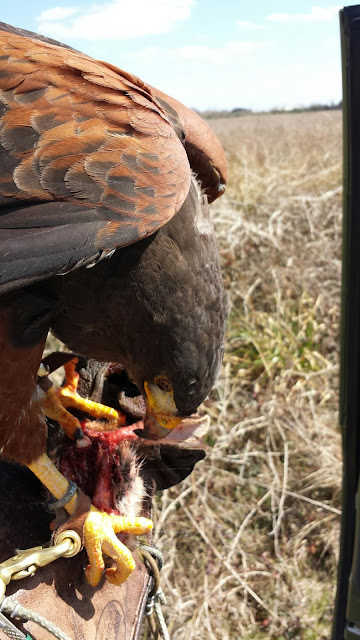 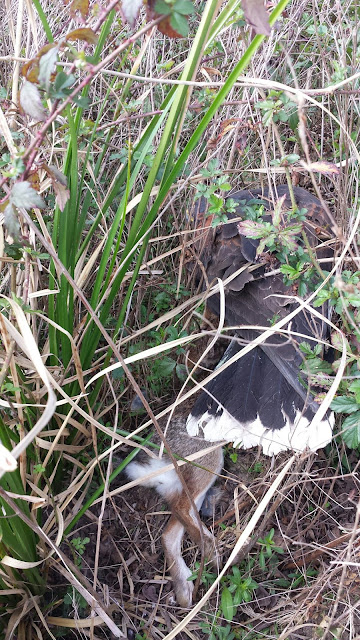 Posted by Chuck Redding at 12:30 PM No comments: 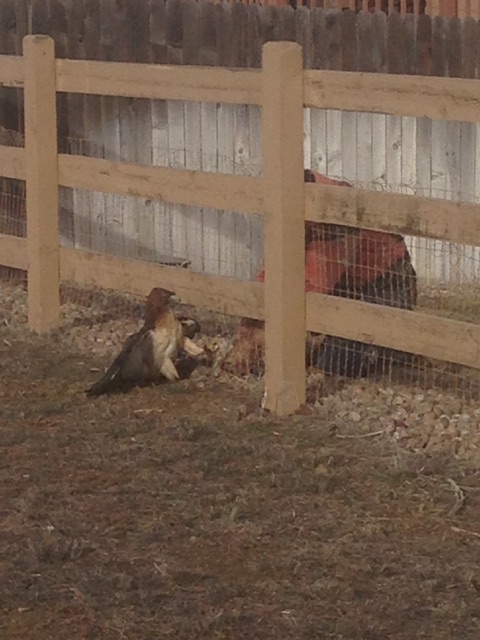 Took a trip to Colorado for 12 days. Met up with falconry buddies, Paul Pennell and Randy Peele. The picture above was probably the highlight, at least from a falconry standpoint. After some great flights in Commerce, CO, Cisco grabbed this rabbit by the head through a wire fence. A good catch and some fancy footwork to bag this rabbit. On the trip, Cisco bagged two rabbits and a mouse. He also chased a jackrabbit in Amarillo.
This following picture was taken a few days earlier when he dropped straight down from a tree, catching this rabbit amidst the twigs, trees, and rocks. This was near Pikes Peak. It was a skillful catch, even if not a spectacular flight. 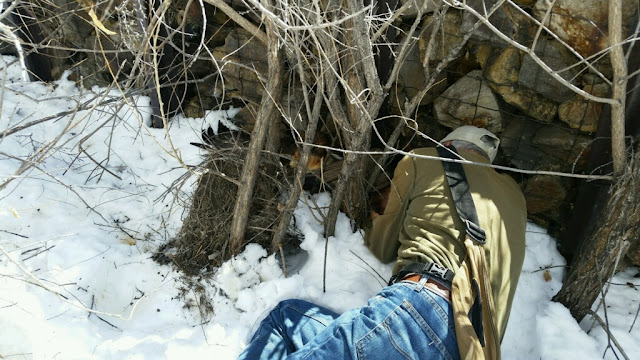 Posted by Chuck Redding at 2:56 PM No comments:

WHAT A DAY !!!! Tried yesterday for a Chukar flight, but no dice. TODAY WE DID. Flushed down hill as they prefer, close slip, maybe 20 feet. I threw him, and he seemed to go a little wide right, but it was SO fast an experience, I’m not sure. But he was RIGHT on it. THESE CHUKARS ARE FAST AND EXPLOSIVE. It seemed he kept the same distance and then 40 feet out started to close and the Chukar made a wide turn and STARTED FLYING UPHILL towards the fast of the woods and cover, as I think it knew it was in a lot of danger. They both came right back past me about 30 yards out and I could see the Chukar was going to put in, in or near the woods, but as it was checking to go in, Mercurius did not slow at all. I lost sight of them for a second behind a tree and then I could see the impact as they rolled head over heels. I was wondering if he could hold it. NO PROBLEM !!! This bird goes right for the head and neck and when I got to him it was in its last flaps. He let me walk right up as usual and take some tidbits and I sat down beside him. I hooked him up and took the picture and then traded him off for a quail I had with me. I covered the chukar because this bird had NO damage to it but its head and neck and I thought hmmm, I could eat this one to see how it is. Instead, Mercurius got his fill on the quail and is sitting happily on one leg.

At least to me I have verified what I suspected but even better! I was not really counting on how nice he is, smart and a joy to work with. Birdy as hell, fast and super capable. When I gutted the Chukar and took off the head I decided to weigh it. 15 1/2 OUNCES. With the head and guts over 16 ounces which is damned near the same size as my bird. He also has power and mettle to not hesitate to go after a strong flying bird his size. The private areas here have to stop in March so I won't be getting a lot of hunting with him this year but plan to start as early as I can after the molt. By the way yesterday I had a couple of false flushes and threw him at nothing. He shot up into the trees and came right down so he is not a tree sitter.

I hope to see some great things from you few others flying these great birds and if you don’t have one, and have a few years under your belt, give it a shot. I have not treated him like a bug and frog eater but like a prize forest hawk and he has returned the favor. I will be dining on Chukar soon, ahhhhhhhhhh. 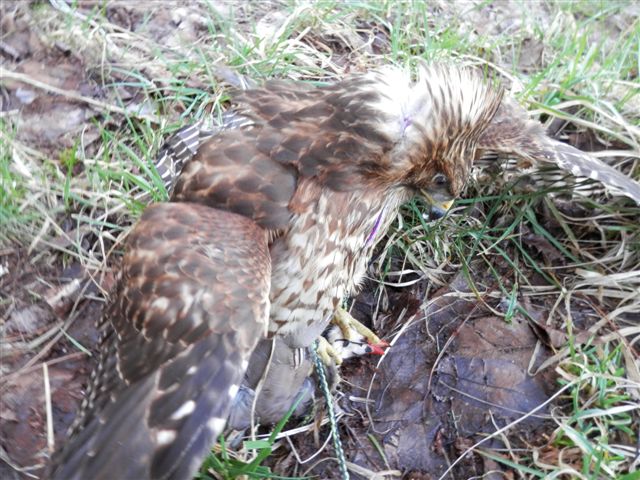 Posted by Chuck Redding at 8:46 PM No comments: